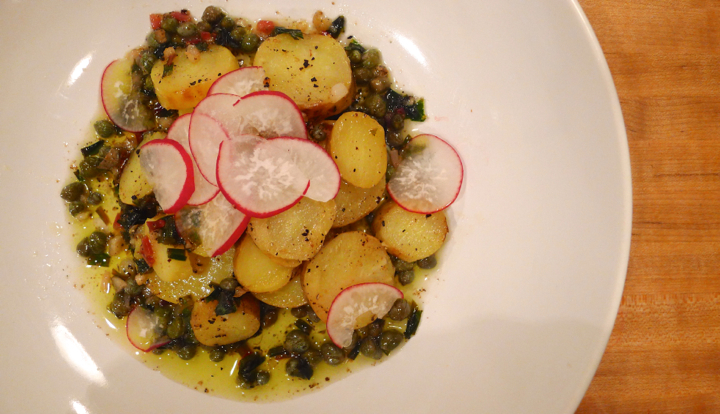 This is my new favorite potato salad! It’s a fun alternative to the traditional mayo-based potato salad (though I’ve been known to eat my way through a few containers of my moms recipe when visiting.) My favorite thing about this recipe is the RAMPS! That’s right, it’s ramp reason. It’ll be over before you know it though, so get them while you can. Ramps are kind of a green onion and garlic type hybrid. They’re only in season a few weeks in the beginning of Spring, and are usually found at farmers markets rather than your local grocery store. My favorite way to eat them is just simply roasted in a pan with a little salt and pepper.

Preheat oven to 350 degrees. Drizzle the potatoes with some olive oil, and bake for 20-30 minutes or until golden and fork tender. While those cook, make the sauce. Sauté the ramps and garlic in the butter for 1-2 minutes, then add the lemon juice, capers, pepper, and olive oil. If you find it’s too tangy, just add more olive oil to lessen the acidity. When the potatoes are ready, slice them into 1/2 inch pieces. Pour some of the ramp and caper sauce into the bottom of the dish, then plate the potatoes on top and drizzle with the rest of the sauce. Top with some thinly slices radishes for color. 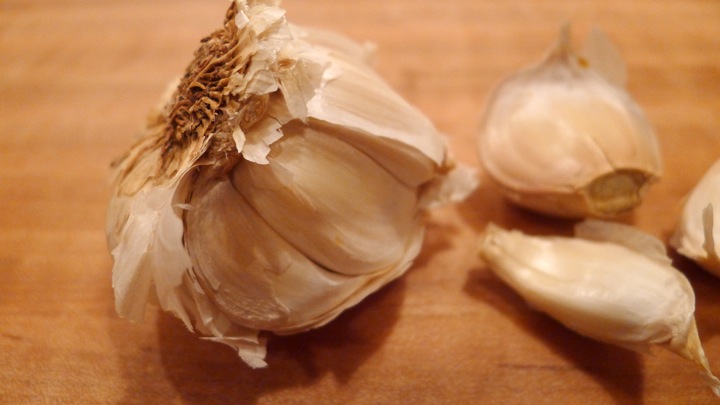 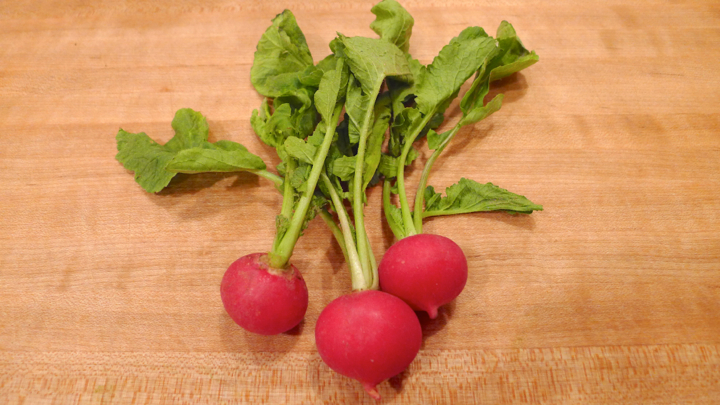 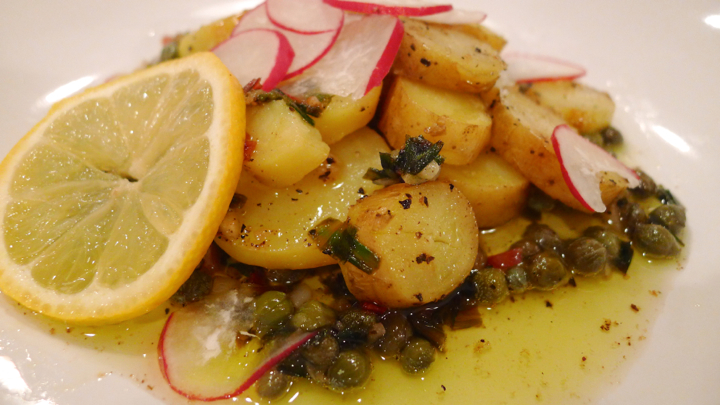 One pot meals are the best, they’re easy and there’s hardly any clean up after. Perfect for the weeknight when your exhausted but still want something delicious! I bought a bunch of chicken thighs this week from Whole Foods, they’re super flavorful and very inexpensive, so I tend to get a few at a time and just freeze the ones I don’t use. When freezing meat, it’s best to wrap them well in plastic wrap, then place in a freezer bag. This way they don’t get freezer burn. Defrost in the fridge and you’re good to go! I usually cook them in a skillet, but this time I decided to plop them right in the vegetable “stew” I made so that they’d soak up all the flavor. I had some nice bread on hand which I dipped in the bowl. Not a drop was left!

Season the chicken with salt and pepper. Add some olive oil to a skillet and brown the chicken on both sides. Plate and set aside. In a heavy bottomed pot, sauté the onion and garlic in the remaining oil for about 3 minutes. Add the carrots, parsnips, kale, and fennel, and cook for about 5 minutes. Next add the crushed tomatoes, chicken stock, crushed red pepper flakes, oregano, paprika, salt and pepper. Bring everything to a boil, then turn down the heat and simmer for about 45 minutes. Lastly, remove the skin from the chicken before serving, as it gets a bit soft cooking in the liquid for a long period of time. Serve with some nice bread on the side! 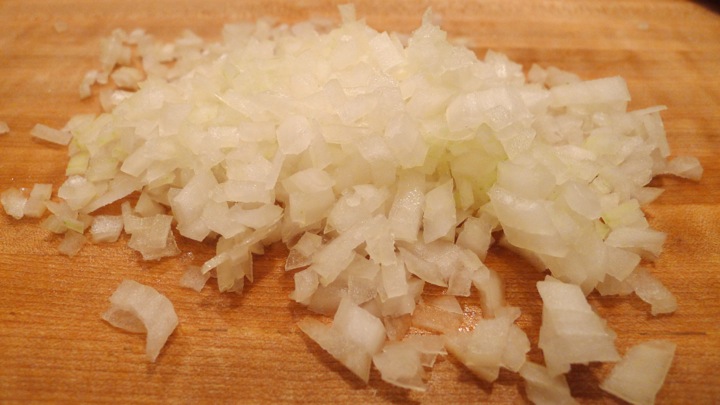 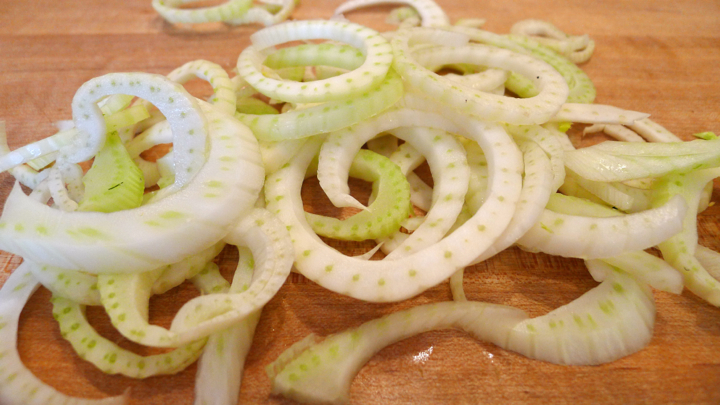 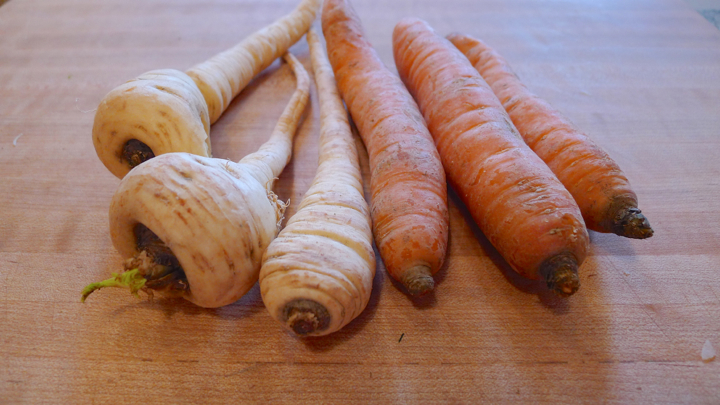 Normally when you think of enchiladas, you think of beans, meat, and cheese. But in my attempt to make a healthier version, I used kale, potato, and mushrooms. They came out pretty good! Mainly because rolling anything up in a tortilla and covering it in sauce is fail proof, and DELICIOUS.

Start by making the salsa verde. Preheat the oven to 350 degrees. Toss the tomatillos, onion, garlic, and jalapeño in some olive oil, and bake for about 30 minutes. Remove and let cool slightly. Place in a blender with the lime juice and cilantro, and blend until smooth. Set aside.

For the enchiladas, boil the potatoes until fork tender, and cook the mushroom in a skillet until slightly browned. In a large skillet, sauté the onion and garlic until translucent, about 3 minutes or so. Add the kale and cook until wilted, then toss in the mushrooms, potato, red pepper flakes, salt and pepper, and let cook for a few more minutes.

Pour some of the salsa verde in the bottom of a baking dish. Fill each tortilla with a good helping of the vegetable mix, and place them side by side in the dish, covering them with the rest of the sauce.

Cover with foil and cook for 30 minutes, then remove the foil and bake for an additional 10 minutes. To serve, plate enchiladas and drizzle with some hot sauce, feta cheese, and fresh cilantro! 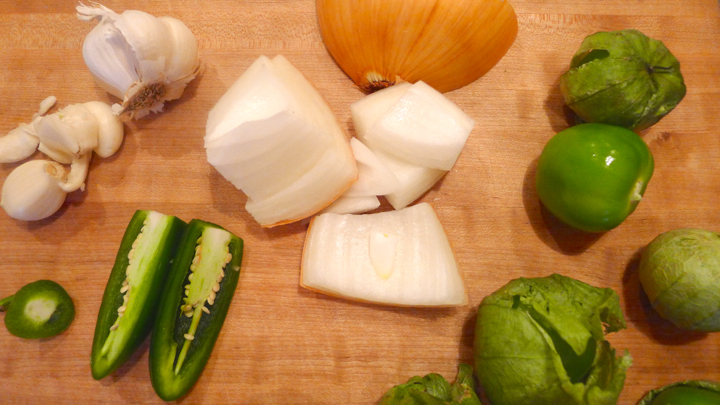 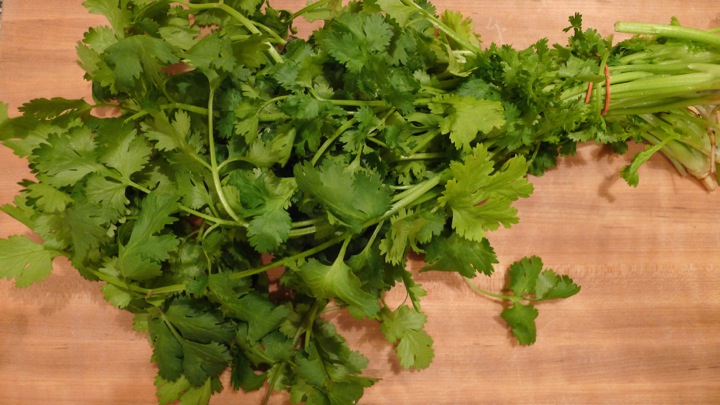 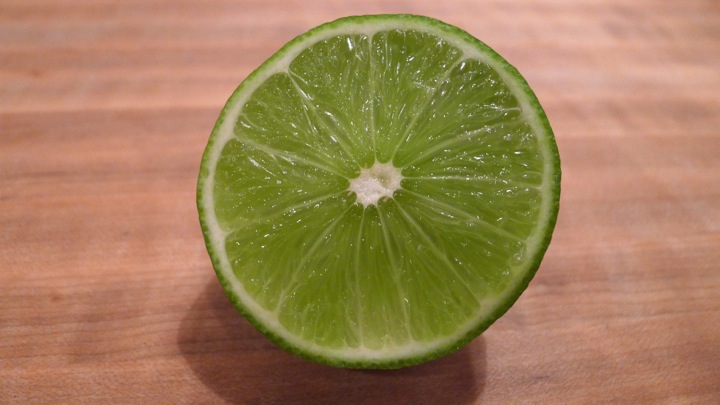 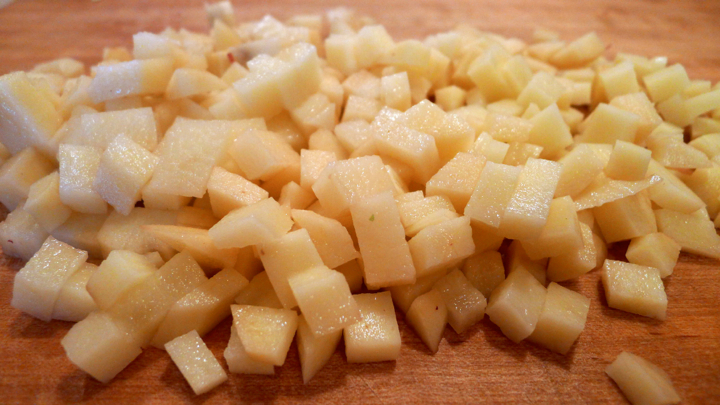 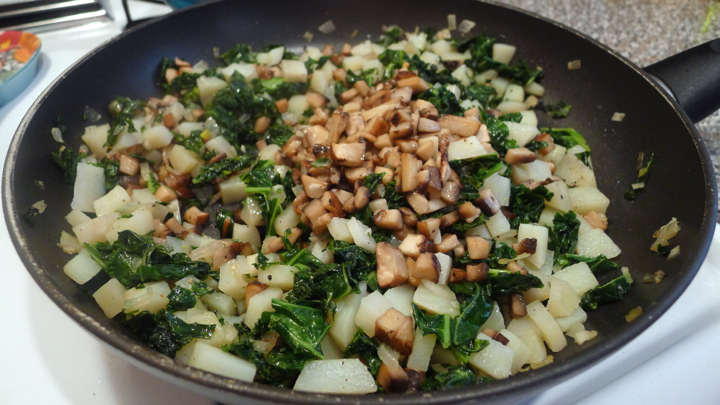 I’ve never attempted homemade gnocchi before and thought it would be a fun Wednesday night experiment for me. I had some kale, a huge sweet potato, and a bag of fresh shiitake mushrooms from my CSA bag this week, so I figured I would use those as my main ingredients. I got my first surprise then I cut into my sweet potato to realize it was white, but after some investigating it turns out sweet potatoes are technically white, and YAMS are the orange ones. So there was that. My next surprise was how easy it was to make gnocchi from scratch! The dough was very easy to make, it was rolling them out and cutting them that took a little longer, though the whole thing probably took 30 minutes.

I chose to make a simple brown butter sauce as I didn’t want to take away from the actual flavor of the gnocchi. I ended up squeezing a lemon over it in the end which I think added some necessary acidity to the dish. Overall a successful pasta party for one!

Get a pot of salted boiling water going and add the sweet potato. Cook until fork tender, then drain and mash in a separate bowl. In another pot, simultaneously blanch the kale by boiling for a minute or two then rinsing under cold water to stop the cooking process. This will help keep it nice and green. Chop the kale very well then add to the bowl with the potato. Mix in the salt, pepper, and nutmeg. Next, add 1/2 cup at a time of flour to the mixture until you have the consistency of pasta dough. You want it to be somewhat elastic and a little sticky, but able to hold its shape. I used about 1 1/2 cups. Divide the dough into 5-6 smaller balls.

On a floured surface, roll each ball out with both hands until you have about a 12 inch long, 1/2 inch diameter wide log. With a floured knife, slice about 12 (1) inch pillows and press them between the backs of two forks to give them that ribbed look.

In a pot of salted boiling water, add a splash of olive oil (to help with the sticking) and toss in about half of the gnocchi. They may stick to the bottom of the pot, so it helps to swirl them with a spoon in the water for the first minute. Cook the gnocchi for about 5 minutes or until they float to the top, then give them one more minute before removing with a slotted spoon.

While the gnocchi is cooking, sauté the shiitake mushrooms in some olive oil. Don’t mix them around too much, as it’s nice to get them a little caramelized on the sides. Add a 1/2 stick of butter, along with the cayenne, sage, red pepper flakes, and a little pepper. Cook until the butter has browned and has a nutty fragrance to it. Make sure not to overcook it though, it can happen fast!

Plate some gnocchi and pour a bit of the brown butter and mushrooms over top. Add some fresh shaved Parmesan cheese and a light squeeze of fresh lemon. Enjoy! 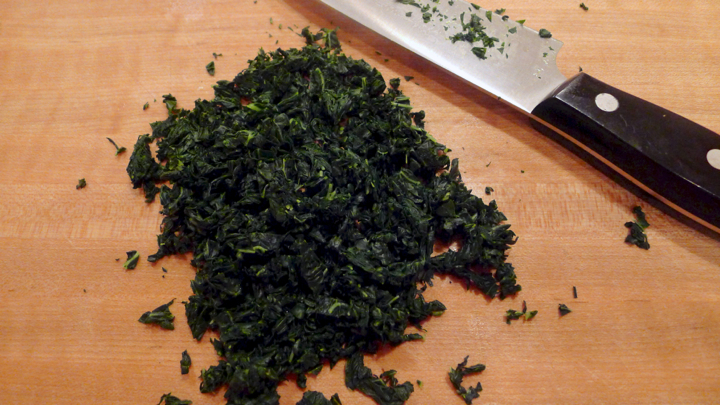 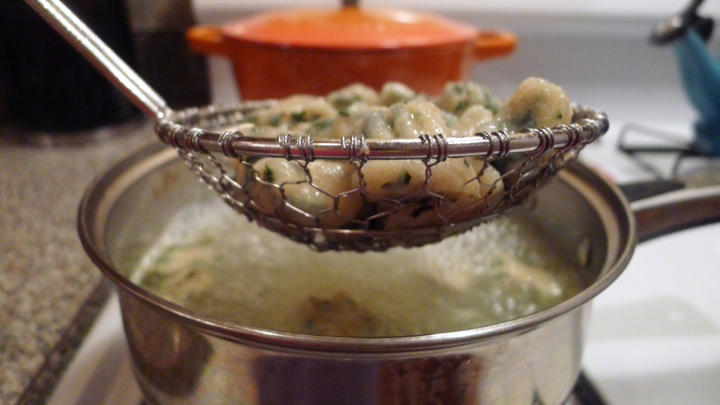 Oh latkes. I latke you A LOT. Crispy potato goodness smothered in sour cream, how could someone not love you? When I got potatoes and parsnips in my CSA bag this week, my sister recommended I make some latkes. She’s the smart sister, clearly. So I did just that! I didn’t even plate them when they were finished, I just ate them right off the cutting board, adding dollops of (horseradish) sour cream and sweet caramelized onions. And with my Rumours record playing in the background and a big glass of wine in hand, it was a perfect little Tuesday night at home!

Start by grating the potato and parsnips. Place in a paper towel and squeeze out the excess liquid. Place the gratings in a bowl and add the minced garlic, chives, egg, flour, cayenne, salt and pepper. Form into patties with your hands and set aside. Heat a large skillet over medium high heat and add a bit of vegetable oil. You want enough that it’ll slightly fry the latkes without making them too oily. Fry the latkas in batches, about 4-5 minutes on each side, or until golden brown with a little crisp. I like to push mine down with the spatula to flatten them a little to help get them crispy. Let drain on a paper towel for a minute or two before serving.

While the latkas are cooking, sauté the onion in some olive oil. At this time, also make the cream by mixing the sour cream and horseradish together. Set both aside until ready to serve with the latkas! 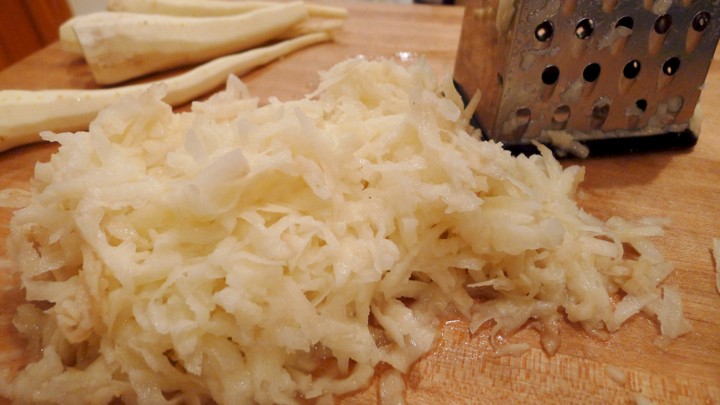 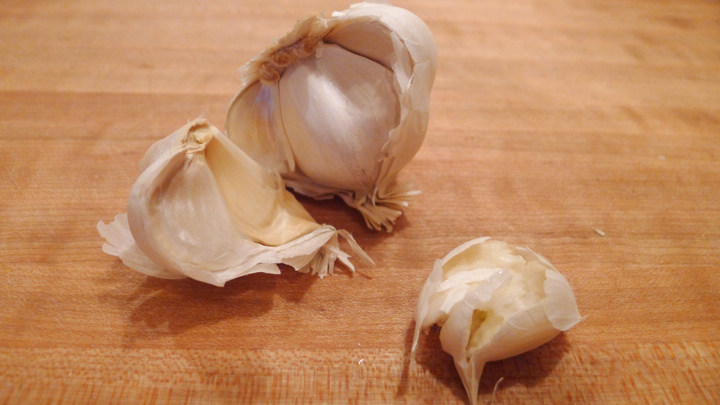 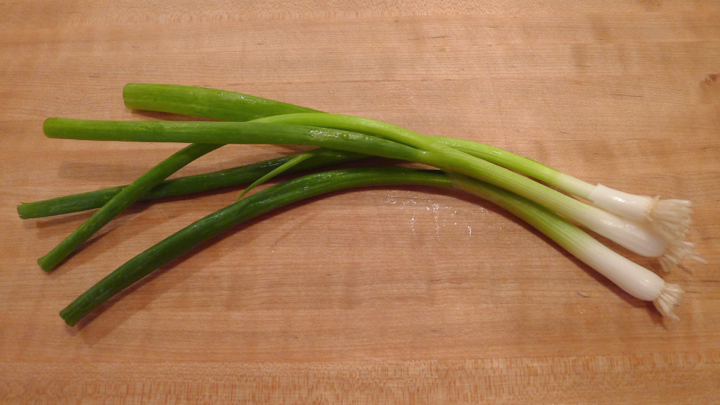